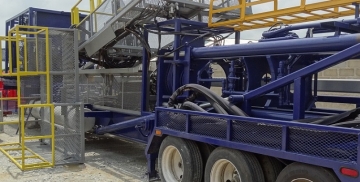 The Hydraulic Work over Unit (HWU) is a diesel powered and hydraulic operated unit used in generating push, pull and torsion forces on the work-string and completion tubing for achieving specific tasks and objectives.

Well configuration and objective determines the rig up mode. Units are designed to be rigged up quickly and can be mounted on a Christmas tree using a sub structure through which the forces/load transmitted is shared or distributed (so the tree sub structure is not overloaded, as an added safety measure).

It can also be rigged up directly on the wellhead, but it must be capable of supporting the weight of the unit and the force generated during the pull and push effect.

The units are designed to handle pipe without the use of a conventional workover rig. All components are compact and utilized for minimized rig up time. They operate in any terrain including land, swamp, shallow and deep offshore.

The HWU has 3 Modes of Operation

1. SNUBBING MODE
Applicable when the well is ‘live’ and the unit is rigged up on Christmas tree. Used mostly for thru-tubing intervention.

2. WORKOVER MODE
Applicable when the well is ‘killed’ (or dead). Christmas tree is removed and BOP’s/HWU unit is rigged up on the wellhead or on a substructure.

TARGET DRILLING currently own 3 x 340,000 lbs. RDE hydraulic snubbing/workover units, all actively in operation in Nigeria, one of which is truck mounted which also has the capability to work both on land and swamp locations.

A typical Hydraulic workover unit (HWO) can contain the following groups and components:

1. A Blowout preventer stack (BOP) comprises of Ram type, annular bop and mud cross.
2. The pipe handling equipment consists of Hydraulic Jack assembly with traveling slips, stationary slips, work window, Rotating head.
3. Counterbalance winch, this allows the operator to handle two joints of tubing at once. While a joint is being pulled or run into the well bore another joint can be laid down or picked up.
4. A power pack system consisting of a diesel Engine, Hydraulic fluid pumps and air compressor and tanks to power all the components of the unit.
5. Workbasket, set on top of Hydraulic Jack this provides a work platform for the control of the process.
6. Remote control console to operate the Bop’s.